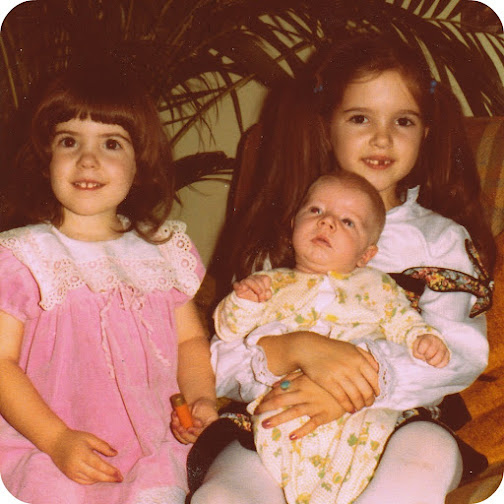 I care a lot about sibling rivalry.  My monthly column in the March issue of  the  Auburn-Opelika Parents magazine focuses on How To Reduce Sibling Rivalry, and I’ve blogged about it here, too.  I’ve read lots of good books on the subject and have tried to implement all the best strategies with my four kids to keep them from growing up hating each other.

Why do I care so much you might ask?  Two reasons, my sister and my brother.  When we were growing up we had some serious rivalry issues.  My little sister and I shared a room until I was in the sixth grade.  It was not a good scene.  We frequently had a line made out of toilet paper going down this middle of the room to keep our spaces separate.  Her side of the room had the closet, so I claimed the door.  Whenever I got to use the closet, she got to use the door.  Really it was more me in charge of this ridiculous system, not her.  But she was the little sister, and she kind of had to go along with it.

Along comes baby brother and my little sister was just as mean to him as I was to her.  When he was asleep in his crib, she would sneak up on him and bite him.  Once she hid in his closet and after he fell asleep for the night she jumped out and scared him half to death.  In her defense, she had no idea that her shenanagins would still be a focus of family discussions thirty years later!  Also, she had a big sister who had been tormenting her for years, and finally having a little brother to pick on was too tempting to resist!

Fast forward to adulthood and my brother, sister, and I are the best of friends.  We live in different states, but there’s not a day that goes by that we don’t have some sort of contact with each other.  Whether email, texting, or calling, we are a part of each other’s day to day lives, and I wouldn’t have it any other way.

Why do I care about reducing sibling rivalry?  Because even if my kids fight with each growing up, I want  them to get along as adults.  To sit around and laugh about the good old days.  Vacation with each other’s  families.  Be there for each other through good times and bad.    Siblings can be rivals, but like mine they also have the potential to grow up to be the best of friends.