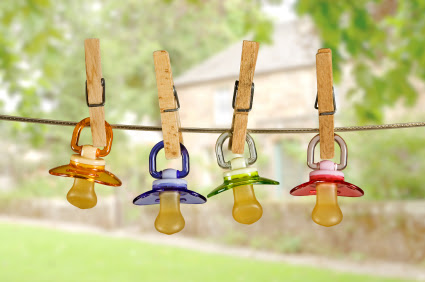 One of my daughters loved using a pacifier. When I say loved, I mean a deep true love that seemed like it would never end.  This mom was no match for that type of affection! But, I knew that she would have to give it up eventually, no matter how much she loved it!

I made all of the usual efforts to get her to give up her pacifier, even consulting with her pediatrician and dentist, but nothing worked. By the time she was three and a half, I knew I had to do something fast or she might be heading off to kindergarten sucking on her pacifier!

There I was in the midst of this most troubling dilemma, when along came the Supernanny! I happened to be watching an episode of this hit reality show where a little boy was having trouble giving up his pacifier. Supernanny swooped in and had him cured overnight! Surely if she could do it, I could too!

How did she manage this, you might ask? Pretty creatively! She introduced the child and his family to the magic, the wonder, the amazement of . . . The Paci-fairy! I had never heard of this fairy, but my gut told me that she might be a cousin of the Tooth Fairy or possibly a distant relative of Santa Claus or the Easter Bunny.

So, we gathered up all the pacifiers in the house and put them in an envelope. We decorated the envelope and put it in our mailbox for the Paci-fairy to pick up. We made sure to put the flag up so she would know she needed to come to our house for a pick up. That night when we went to sleep, we made a big deal about her being old enough to give up her pacifiers!

In the morning, she rushed out to the mailbox which had been decorated top to bottom with sparkly star studded garland by the Paci-fairy! She opened the mailbox and found a gigantic envelope addressed to her that was packed with fun toys, surprises, and confetti. There was a party going on in our mailbox! It was quite a spectacle! We were so proud of her for being such a big girl, and she was so excited about being rewarded for her sacrifice.

I’ll admit that she still asked for her pacifier for a few nights, but she understood that they had been mailed and were now gone. Although she was sad because she missed them, she seemed surprisingly okay with the permanence of the situation.

For more information on the Paci-fairy technique, check out Supernanny.  If it worked for us, it might be just the solution you need to get rid of the pacifiers in your house once and for all!