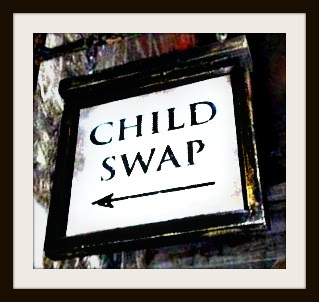 If you’re planning a trip to Walt Disney World or Universal Studios in Orlando with young children, then you need to know about Child Swap.  No, I don’t mean that you get to swap kids with random strangers (although at times you might feel like it!).

My family just got back from a trip to Orlando, and we probably wouldn’t have survived without it.  Here’s how Child Swap works:

Sounds cool right?  Well, it is!  But there are some differences between the Child Swap programs for Disney World and Universal that you should know about before you travel.  For me, Disney is the clear winner.

At Universal, on the other hand, the whole family has to wait in line (including the non-riding child).  Sometimes this can be up to an hour, and many of the rides have some pretty scary lines (think Mummy)!  When you finally make it to the front of the line, the non-riding parent and child are escorted to a small holding room where they sit (or stand because the room is TINY) until the riding parent and child come for the swap.

If your toddlers are anything like mine, you can imagine how hard it is to explain to them that they are going to have to wait in a line for one hour and then NOT get to ride!  The poor kids even have to watch their family members get on the ride before they are ushered to their holding cell room.  It was torture!

If we had gotten a Child Swap ticket like you do at Disney then we could have taken the younger child to any of the toddler themed areas at Universal while we waited, and they would have had a blast.  But that’s not how it works at Universal.  And that’s why Disney wins the Child Swap battle in my book.  Hands down.