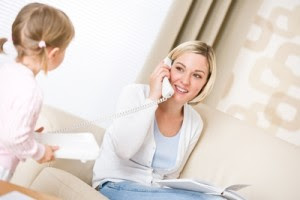 Whenever I get on the phone, my children immediately need me.  As soon as they hear the phone ring I could swear that all four of them have a pressing issue that needs to be attended to by me at that very moment.  I think they have a sixth sense or something that Mommy does not want to be interrupted (and so they do!).  Does this ever happen to you?  I’ve taken to locking myself in the laundry room to talk on the phone in peace, but there’s got to be another way!

I know what the problem is.  It doesn’t take a rocket scientist to figure it out.  Whenever they interrupt me on the phone, I give them attention.  Don’t get me wrong, it’s not a good kind of attention!  It’s “I’m on the phone you need to wait until I’m off!”  It’s the dreaded look.  It’s “THIS BETTER BE AN EMERGENCY OR ELSE!”  But it’s attention nonetheless.  And giving them attention is reinforcing their behavior of interrupting me.

If there’s one thing psychologists know, it’s that when you reinforce a behavior enough it’s going to increase!  Giving my kids attention when they interrupt me on the phone only reinforces and increases that behavior.  And the next time I’m on the phone they won’t think twice about disrupting my conversation.

So, what can I do to stop reinforcing behaviors that I don’t like?  First, I need to monitor my own responses.  How do I react when my children do something I don’t like?  Am I accidentally reinforcing behaviors that I want them to decrease, not increase?  Just like with my little phone interrupters, there are probably other things that I’m rewarding unintentionally.  Making myself aware of those behaviors is the first step in getting a handle on the problem.

Next, I need to STOP!  That’s not so hard is it? Oh yes it is!  I’ve tried it a lot over the years and it’s a tough task.  But if it’s important to you like it is to me, then we’ve got to put forth the effort to make the change.  Instead of accidentally reinforcing behaviors that we want to put an end to, we need to ignore them.  It’s that simple.

It’s even okay to set the kids down and let them know what you’re doing.  It doesn’t have to be a secret that you’ve got this reinforcement thing figured out!  For my problem I can say, “From now on when Mommy is on the phone, you need to wait until I am finished to ask me any questions or tell me anything unless it is an emergency (like blood or fire!).”  From then on ignore them when they interrupt you.  After a while they’ll get the idea.  And you’ll finally finish a phone conversation.